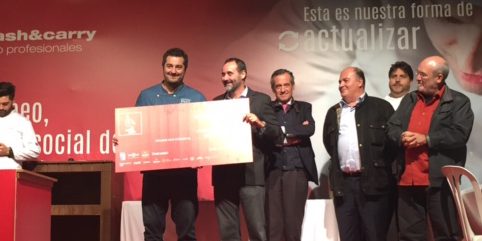 the cover suckling pig ear…??, the same with which we won the award for Top More Traditional at National Competition Valladolid Spikes and Tapas, Presented by Antonio Rodriguez Bort, Executive Chef Grupo La Raza, In representation of Rocala, He has obtained the first prize Gourmet Contest Sevilla Tapas Week. Second prize, which has been shared, He has fallen on Earth Taberna Gourmet and in Frptn.

A total of 139 restaurants involved in editing 2016 from Sevilla Tapas Week, of those who 10 They were selected live cooking tapas jury composed of personalities from the world of gastronomy as they are Elias Xanty, Restaurant chef Acánthum (Huelva) Michelin star; Fernando Huidobro, president of the Andalusian Academy of Gastronomy and Tourism; Y Carlos Maribona, food critic, among others. This jury said lid by Rocala “binding of the culinary tradition and innovation, with an edgy and groundbreaking bet”.

Although you fear to 20 November to test at each facility covers all presented in competition, ¡suckling pig ear…?? It is incorporated permanently to the letter Rocala!

Gastronomic Days of the Spoon
20 February, 2018

This site uses cookies for you to have the best user experience. If you continue to browse you are giving your consent to the acceptance of the aforementioned cookies and acceptance of our Cookies Policy. TO ACCEPT